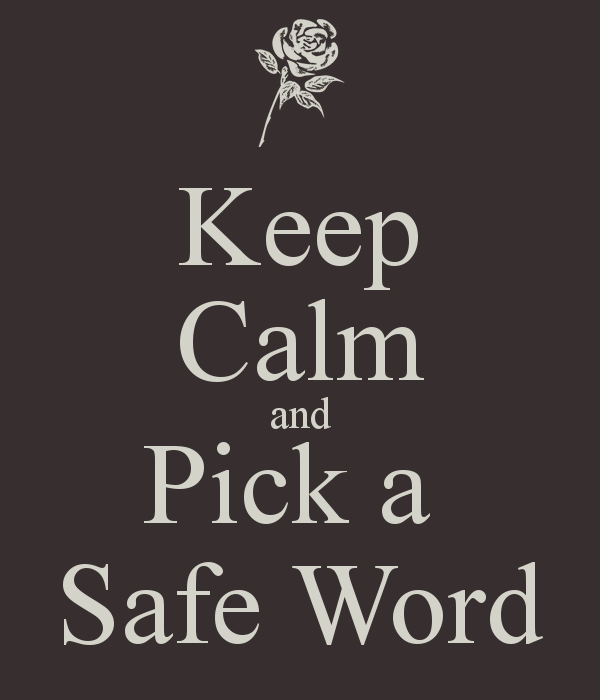 So many times you hear people make the statement that slaves should not have safewords because they are not supposed to say “No” to their Master. Or you will hear others claim that it is topping from the bottom.  I am not sure where this came from, but both statements are wrong – if a safe word is used in its proper context. I will say that if a sub/slave uses a safe word to just get out of doing something that is not fun and kinky, then they are wrong. If a sub/slave uses a safe word to try and control their Dominant, they are wrong. That is abusing something that is put in place to protect the Dominant’s property.

Here is a good example of what safe words are. All vehicles come with warning lights in the dash. The driver of the vehicle is the Dominant. The submissive is the car and the warning lights are safe words.  You may have a warning light come on, and it is something that can quickly be corrected and you are able to continue on your way.  However, if you choose to ignore it, it could end up costing you down the road. An example of this is the low air alarm. You stop and put air in your tire and continue on your way with no damage to the tire or the vehicle.  This is like the yellow (or whatever word you use to pause a scene).

Then you have warning lights on your vehicle that tells you that you need to stop the car immediately. A good example of this is your gauge or light that lets you know your car is running hot. You can continue on if you choose, but where is that going to leave you when you crack a head on the vehicle? This would be Red (or whatever word you choose to stop a scene).

In both of the scenarios I just gave, who is in charge – the driver or the vehicle? The driver is still in control of the vehicle. The vehicle just let them know that there is an issue that needs the driver to take care of as a good owner. Now you could remove the fuses that work your warning lights and just take your chances on nothing ever going wrong. But is that taking care of your property? Is that proving that you value your vehicle and what it brings to you?

Now I know there are people that will refuse to use safe words, and if both parties agree to that, then that is fine. But do not remove them from a dynamic based on the misguided idea that by having them the submissive is saying “No” or trying to Top from the bottom.  They are something the Dominant wants their submissive to use to protect what belongs to him/her.

And on an end note, submissives, if you have safe words, do not refuse to use them because you feel like you are failing your Dominant. You are only failing your Dominant when you refuse to let him know that something is wrong and you allow his/her property to be damaged. It is your job to take care of and protect your Dominant’s most treasured possession. You are also telling him/her that you do not trust them when they tell you they will not be disappointed or upset that you let them know something is wrong.

Writings about my life as a wife, a submissive, a Pagan, a mother, a daughter, a lover, a student, an educator, a fighter and a peacemaker. Blessed be ⭐❤⭐

4 out of 5 dentists recommend this WordPress.com site

Under Lock and Key

My Journey as a newly submissive wife

A Kick-ass Submissive for the 21st Century

Words From The Underground

enter the halls of Hell through the Queen's prose

my adventures in second life.. a little bit of everything

Thoughts and feelings of a submissive.

Our variation of DD/lg

Thoughts of an independent traveler through life

On A Magic Carpet Ride

daddyundbabygirl's Blog
REVENGE OF THE FEELS

A site for romance and thriller author, Cassandre Dayne

The Art and Craft of Blogging

The latest news on WordPress.com and the WordPress community.